I have been a fan of zombies ever since I saw Return of the Living Dead on USA Up All Night. There’s something interesting about the undead that has kept me drawn after all these years. I think my love of the undead stems from the psychological aspect of how to handle a loved one who gets bit. There’s no cure except a bullet to the head.  Since Halloween is approaching, I wanted to take some time to go over some of my favorite zombie movies that I had a chance to sit and rewatch recently. This list isn’t definitive of all my favorite titles because that is a huge list. I just wanted to go over the few that rekindled my love of the undead.

Dance of the dead (2008) has always been on my Twitter list for people to watch because I love it so much. It’s a refreshing take on the zombie genre with a group of heroes that I can root for. I mean there is not one of the high school students that I dislike which is rare. The plot changes some of the zombie lore by having the undead just shoot off from their graves which was unexpected. The dance section of the movie was completely not what I thought it was going to be and I honestly don’t want to spoil it. The gore is fantastic especially the part with the kiss. If you get the chance to see this movie give it a go. I have a feeling it might be on your regular rotation.

Return of the living dead (1985) was first introduced to me on “USA Up All Night” where I can safely say my love of the undead came to fruition. I appreciate the campiness that this movie offers especially now that I’m older.  I love how they gave the zombies a voice with the iconic “Brains” right before Suicide gets his head chomped on by Tarman. It’s zany, weird, and has my actor crush, Thom Matthews, in it which makes it so much better. I feel this movie was a great way for me to sink my teeth into the zombie genre and one I faithfully watch every year. I do think that the ending inspired the ending of Resident Evil 2 and Nemesis with the town being obliterated by the government due to the outbreak. No idea if this is true, but I think it be cool if it were.

Flight of the living dead: Outbreak on a plane (2007) takes my phobia of air-borne illness while flying to a whole new nightmare. I can’t explain how or why I got this phobia of getting a mystery illness and the government having to shoot down the plane to avoid having it infect the rest of the country being infected. I know, I’m an odd duck. However, this movie plays into that fear quite well and twists it by being stranded on a plane full of zombies. The movie is a fun misadventure of trying to stay alive while dealing with the undead horde. There are few places to hide on the plane and the survivors are forced to think of ways to get off the plane without dying.  I almost would rather be stuck with snakes. I found this movie to be a hidden gem among the many zombie movies I own or have seen. Plus, it has a great soundtrack.

Resident Evil Apocalypse (2004) is the only movie, I feel, that is the closest we have to a decent video game adaption of the series. Sienna Guillory as Jill Valentine is the true star of the movie. All the scenes that she is in just makes the movie better. This movie is a lot of fun and exciting take on the hell that the residents of Racoon City suffered at the hands of Umbrella. I really enjoyed that it showed the panic, frustration, and no way to escape which made the plight more heartbreaking. I also enjoyed having a reporter tag along that made me think of Resident Evil Outbreak. The movie is better left if you go in with no expectations and enjoy it for what it is versus what you hope it would be. I ended up enjoying the movie and the franchise a lot more because of that mindstate.

Night of the creeps (1986) was a movie I saw from USA Up All Night in all the edited glory. It wasn’t until I saw it on one of my parent’s cable services that I was fully able to see everything that this movie had to offer that I became a fan. The movie has so much to offer with an unlikely cast of heroes battling zombies while dressed up in prom attire. Becoming a zombie by just having a slug invade their body is a nice twist. I feel it still holds up well after all these years and it’s a solid horror movie. There’s just something about a semiformal dance and battling the undead that makes it so entertaining. High heels, Aquanet and a shotgun blast to the face.

Dead Alive (1992) is my first experience with Peter Jackson. I did not know anything about this movie when I rented it as a thirteen-year-old for a weekend movie night. However, if I knew what fresh hell I was getting myself into, at such a young age, I would have never rented it. I guess I could say that about a lot of the movies I watch even now. This movie is a rollercoaster ride that you cannot escape from until the credits and it still leaves a bad taste in your mouth. The gore is over the top to the point where the sound of a blender would make me ill. I do enjoy this movie and have watched it a few times throughout the years. I still get nauseous with the gore, but it wouldn’t be a zombie movie without it. Just do yourself a favor and don’t eat before watching.

I would love to know your thoughts. I’m sure I’m missing a lot of great flicks and wouldn’t mind getting my teeth into. No pun intended. Please let me know what movies I should check out.

I'm a northern who lives in the sunshine state with my best friend and partner in crime. I am a budding photographer who tends to take pictures of everything and anything much to the dismay of my friends. I also enjoy video games especially retro games and modern gaming. View all posts by esperdreams 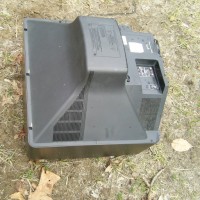 Perspectives on gaming from a life long enthusiast

The Misadventures of an Aging Gamer

Taking on life, one game at a time

A little about gaming and hunting for retro gems...